PATRON : THE PRIME MINISTER OF PAKISTAN

Pakistan International Council was set up in 2008 as independent non-political global platform that connects distinguished Pakistani Business and Corporate Leaders within Pakistan and around the world in an effort to create opportunities to collaborate, share ideas and contribute positively towards building a Positive Progressive and Democratic Pakistan.
We act as a bridge that connects Pakistani and International Businesses and fosters positive trade relations between Pakistan and other countries by engaging the business community, chambers of commerce, relevant trade promotion agencies as well as the Overseas Pakistani business and corporate leaders across the world.

A Global Network of Distinguished Pakistan

The Honourable Prime Minister of Pakistan was pleased to accord his distinguished patronage to our organization in 2008. While we remain totally independent and non-political, we continue to work positively with all funtionaries of state for Pakistan’s progress and prosperity in the National interest. Our inaugural session was held in 2008 under the chairmanship of the Prime Minister of Pakistan in Islamabad Overseas Pakistanis and Friends of Pakistan from United Kingdom, Europe and Middle East were present at the ceremony, Since its formation the Council has launched numerous initiatives , organized conferences and seminars to promote trade and investment as well as facilitated delegations to Pakistan.

Overseas Pakistanis Business Forum is a bridge that connects Pakistani and International Businesses. We also create opportunities for distinguished business and corporate leaders from Pakistan and around the world to mutually collaborate and explore new avenues of cooperation aimed promoting trade and at encouraging investment in Pakistan.

Overseas Pakistani Business Council is a Global Network that connects Pakistani & International Business Community and creates networking opportunities for them across United Kingdom, Europe, North America and the Middle East and to boost economic activity.

Overseas Pakistani Business Council is a Global Network that connects Pakistani & International Business Community and creates networking opportunities for them across United Kingdom, Europe, North America and the Middle East and to boost economic activity.

Positive Pakistan Forum International is an independent non political platform that connects distinguished Pakistani Business & Corporate Leaders Academics and other eminent personalities within Pakistan and around the world in an effort to create opportunities for them to collaborate, share ideas, and play a meaningful role towards contributing in building a Positive. Progressive and Prosperous Pakistan, in line with the vision of our founding fathers.

The Forum was launched at an impressive ceremony in Dubai in 2008 which was presided by the Foreign Minister of Pakistan.

We organize various events and activities in Pakistan and around the world and work closely with individuals and organizations in the public and private sector.

Positive Pakistan Forum maintains close networks with Friends of Pakistan in various countries who have a close affinity towards Pakistan and we work closely with them.
Previous
Next

Positive Pakistan Forum organizes events in collaboration with its global associates in different countries in an effort to create opportunities for Overseas Pakistanis connect and explore avenues of cooperation. Through our Seminars, Conferences and Networking dinners we also highlight Business, Trade and Investment Opportunities in Pakistan and promote a positive image of the country through Art, Culture, Music and Poetry.

For Further details email us : Office@ThePakistanForum.com

For Further details email us : Office@ThePakistanForum.com

The Pakistan Dialogue is a Thought Leadership initiative by Positive Pakistan Forum in collaboration with our Associates aimed at proposing Positive Solutions to the emerging challenges facing Pakistan.

Positive Pakistan Forum recognizes and appreciates the important and instrumental role being played by Pakistani Professionals, Corporate leaders and CEOs in Pakistan and around the world.&nbsp; We are pleased to have some prominent CEOs and corporate leaders in Pakistan as well as in other countries and through this forum we aim to provide them of Pakistani origin associated with our Forum and we aim to provide a platform that enables them to contribute towards Pakistan’s progress and prosperity through their skills, advice and expertise.

We work closely with

Positive Pakistan Forum strongly believes that Pakistani women have an important and vital role in the progress and prosperity of Pakistan and therefore PPF – Womens Network has been especially formulated to welcome participation by ladies from different walks of life both inside Pakistan and around the world. We have some distinguished Pakistani women associated with our Forum and welcome others. Our events and activities include :

We work closely with

Under the Patronage of The Prime Minister

Global Pakistani Awards : Under Patronage of the Prime Minister Positive Pakistan Forum believes in recognizing the contributions of distinguished Pakistani personalities from Pakistan as well as the Overseas Pakistani community. In this context in association with Pakistan International Council maintains and operates a GLOBAL PAKISTANI AWARD program which is given to highly distinguished personalities.
Previous
Next

Positive Pakistan Forum in association with Overseas Pakistanis Business Council is a global network that connects Distinguished Pakistani businesspersons & professionals and if you want to start a chapter of PPF or OBPC In your country you can contact us.

Start a Chapter your Country 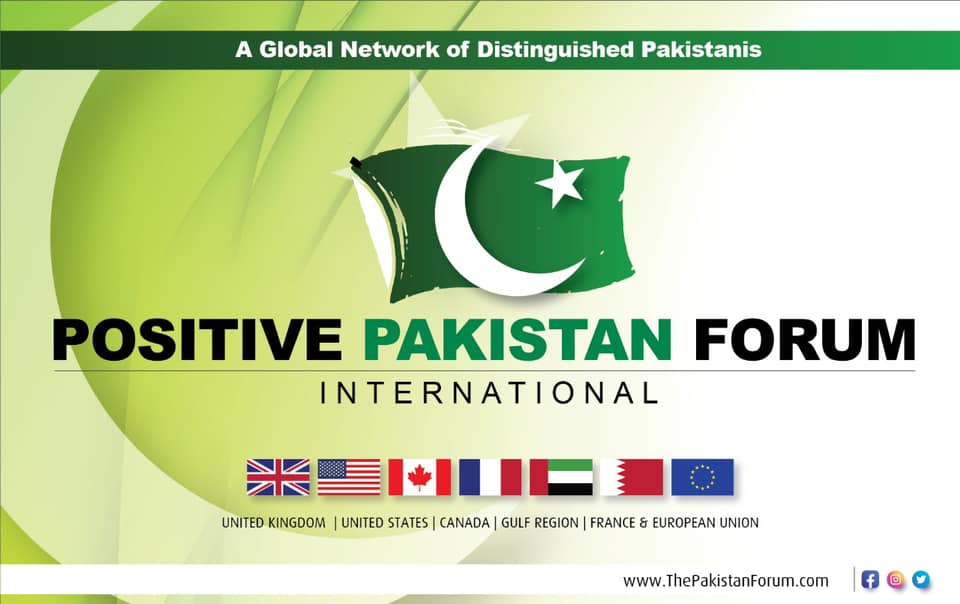 Do you want to join  Positive Pakistan Forum or Overseas Pakistanis Business Council – or do you want to be part of our Events and Activities in Pakistan, London, Europe or other countries?